The Amazon – Heart of the Earth

EXPLORE
The Amazon – Heart of the Earth

Antonio Donato Nobre researches the “ingenious systems” of the Amazon. His work illustrates the beautiful complexity of this region, as well as its fragility against a backdrop of climate change.

In his 2011 TED presentation, he talks about the analogies between nature, and human physiology. Starting with the blood and water, and how the two are very similar in function.

In the body, fresh blood circulates, delivering vital nutrients to our organs, and brings the used blood back to be renewed. The Amazon is where the renewal process happens in our ecosystem. And it does it with great force.

The Amazon is extremely important for the world’s climate. The equatorial region and the Amazon in particular, is the area in the world that constitutes for the majority of the world’s rainfall.

This is significant because the rainfall and evaporation is the key for keeping temperatures where they are supposed to be. As we eliminate these powerful engines of evaporation, we reduce the planets ability to turn on the air conditioning.

Let’s back up – what causes evaporation? What pushes all this water up into the atmosphere? One thing that pushed water up into atmosphere is a geyser. Geysers use the heat of magma to blast water into the air. But there are no geysers in the rainforest. 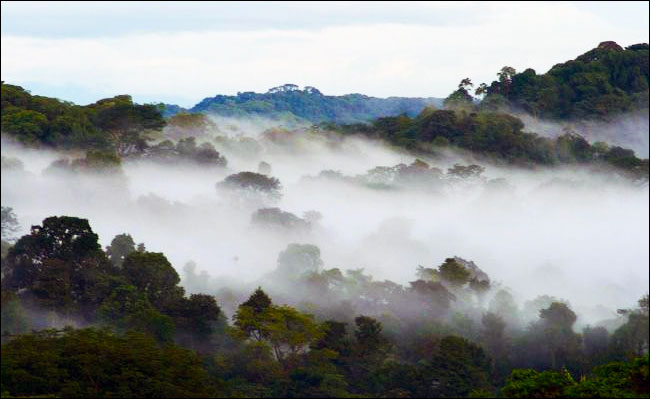 Actually, what pushes water up into the atmosphere are trees. Those things all around us made of wood with leaves on them. And they don’t need magma, they just need sunlight. A big tree can transfer 1,000 liters of water into the air per day through a process called transpiration.

There are about 600 billion trees in the Amazon Rainforest. In total per day they move 20 billion metric tons of water into the air. The amount of energy required if we took all this water and put it into a giant kettle and boiled it, would be equal to roughly 50,000 of the world’s largest hydroelectric power plants. But the Amazon does this for us free of charge.

The presentation can be viewed here