The Amazon Rainforest is home to a mystifying array of wildlife, from pink dolphins to enchanting three-toed sloths; but none more dazzling than the Blue Morpho Butterfly (Morpho Menelaus). One of the most sought after species of insects, this neotropical butterfly is nothing short of a showstopper. 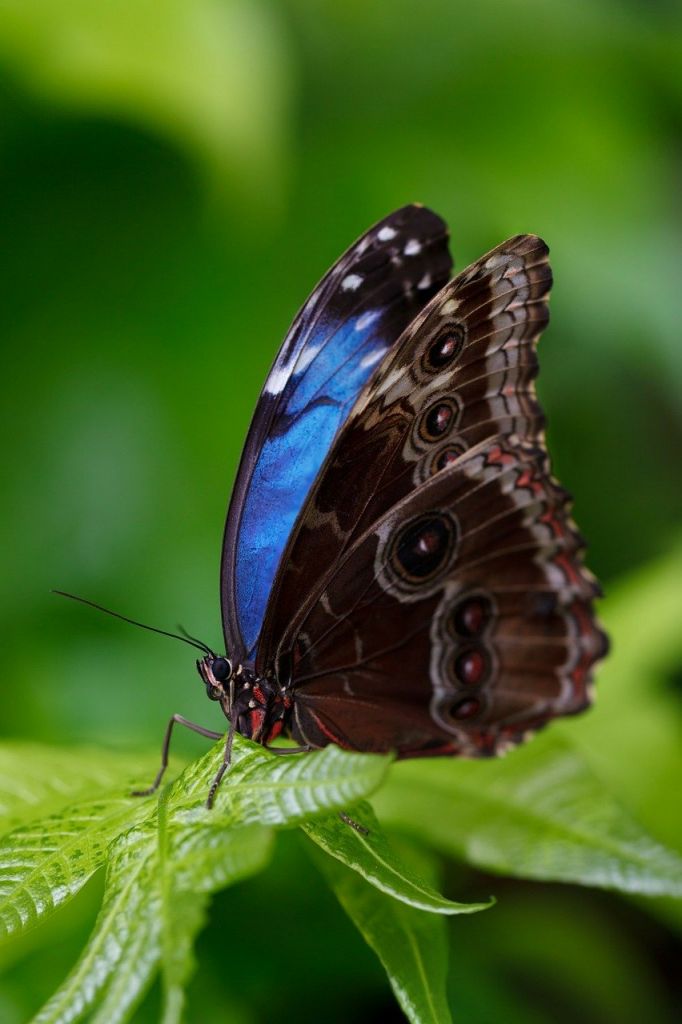 It is said that the shine of their wings becomes so bright when traveling in swarms; it causes onlookers to shield their eyes. The blue Morpho, (Lepidoptera: Nymphalidae) has bright “blue” wings, however, the color does not come from pigment. Actually, microscopic diamond-shaped scales are located on the upper side of their wings, organized into a complex layered structure that causes the incoming light to diffract and interfere with each other, and as a result, we perceive the color blue. This property is called “iridescence”.

This impressive glow is only found on the upper side of its wings while underneath, they are black and brown colored with eye-like circles on the edges. However, the males and females do not look the same, while the male has bright blue coloring, female Morphos are usually brown or yellow. This will keep them less noticeable while they lay their eggs. 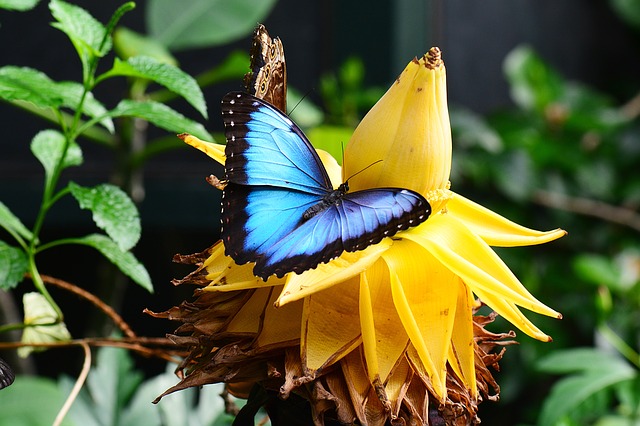 Among the largest in the world, their wings can be up to 18 cm or 8 inches; the males’ wings are broader than those of the females, they – alike other butterflies – have two clubbed antennas, two fore wings, two hind wings, and six legs. Another interesting fact: when their wings are folded, and this usually happens during resting times, they merge seamlessly with the background bark and leaves, remaining safe from predators.

Their Habitat and Lifecycle

They live in the tropical forests of Central and South America, from Mexico to Colombia looking for warm temperate climates, often flying in swarms around rivers in the Amazon region. Even though they spend most of their adult life on the forest floor with their wings folded, they will fly through the forest while looking for a mate. Actually, the larger portion of their time will be spent eating and reproducing.

With a life cycle of 115 days, they go through 4 stages: egg, larva (caterpillar), pupa (chrysalis) and imago (adult). Blue Morpho caterpillars look very different from the adult butterfly, they are small and red-brown with patches of pale green, and perhaps the most interesting fact is their dangerous side: they contain poison deadly for smaller animals. 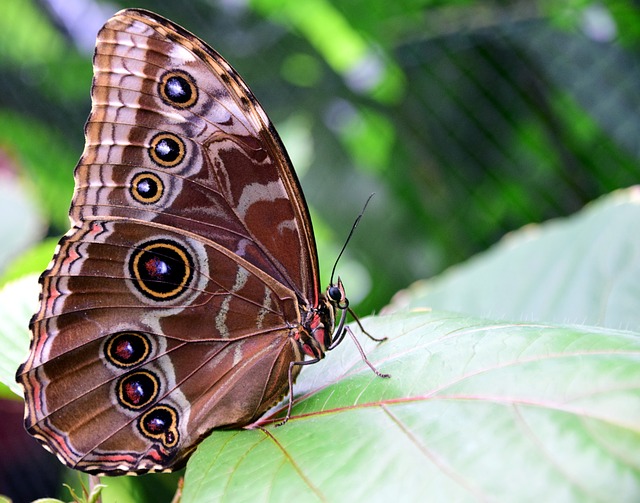 Caterpillars of morpho butterflies mostly eat the leaves of plants from the pea family; from these plants, they can get poisonous substances that don’t affect them but keep them safe from predators. Nevertheless, the caterpillars are not the only ones with an interesting diet.

Once a butterfly, this curious species, is unable to chew thus drinking its food instead. Using its “proboscis”, an extended mouthpart used as a straw they mostly feed on the juices of fermenting fruits, leaves, fungi and decomposing animals. What’s more, Blue Morphos have taste sensors on their feet and their antennae serve as both tongue and nose, so they can taste and smell the air!

Blue Morphos are an exciting and fascinating source of analysis. From collectors to scientists, this butterfly holds people’s attention. Originally, native people of the Amazon believed them to be wish granters, spiritual guides showing the “truths of the world”. On the contrary, because of their capacity to ingest poisonous substances and accumulate them as they grow, many tribes that use insects as a source of poison, actually see them as evil spirits. Nevertheless, recently they’ve helped inspire many technological advances. Engineers at the Australian National University have greatly improved the efficiency of solar cells with effective light management inspired by the wings of the Blue Morpho’s light-reflecting abilities. 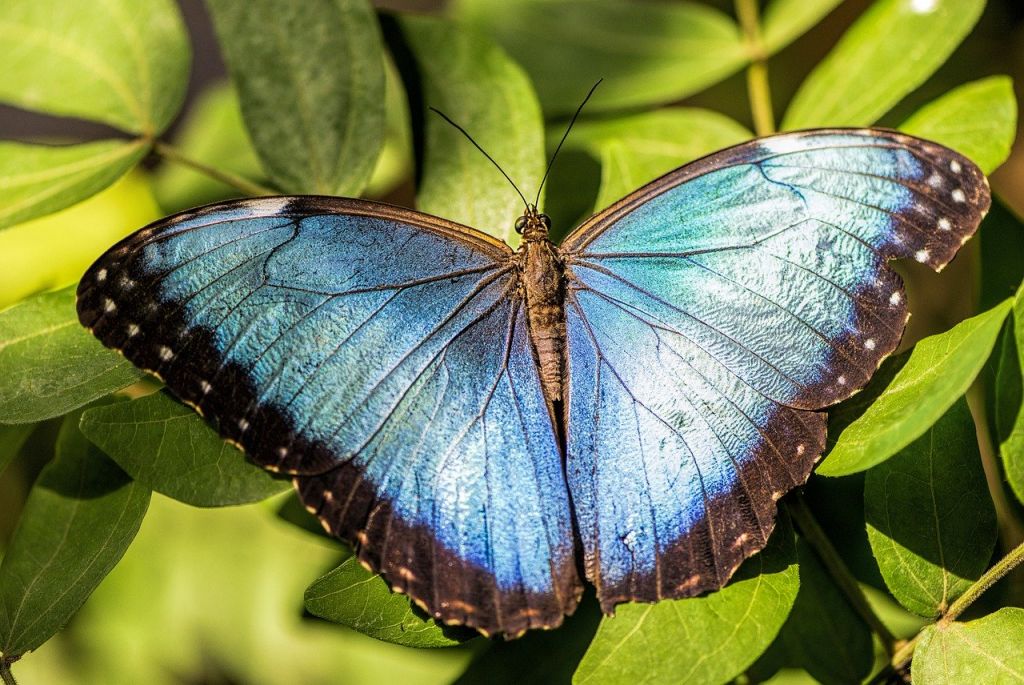 Sadly, these butterflies face many threats to their wellbeing. Like most species in the Amazon, deforestation of tropical forests and habitat fragmentation is the number one concern. Second on their list, are their natural predators including birds, bees, lizards, spiders, and small rodents. But that’s not all; these stunning creatures are also target for collectors or designers looking to create pieces using their iridescent wings. Out biggest advice when purchasing souvenirs, is to never buy anything that comes from an animal product.

These exquisite creatures are a rare sight in our daily lives, and given that in an adult form they live around 1 to 2 weeks, getting to enjoy them in their natural habitat is a luxury reserved for those who visit the Amazon. For more information about seeing the Blue Morpho Butterflies in the Upper Peruvian Amazon, please contact us or call 1-833-201-8684.