Sloths in the Amazon Rainforest

EXPLORE
Sloths in the Amazon Rainforest

The Amazon Rainforest is consistently praised for its vast biodiversity and regarded as a top destination to spot some of the most fascinating wildlife. It’s no surprise that the Amazon basin is home to over 2,000 species of animals. Despite the diverse ecosystem, some Amazonian wildlife, like the sloths who call the tree-top canopy home, may be difficult to spot.

With a bit of luck and help from Delfin Amazon Cruise naturalist guides, you might catch a glimpse of a sloth, carefully camouflaged in the tropical tree branches. This intriguing yet adorable mammal is mainly found in the tropical rainforests of Central and South America. Read on the learn a few interesting facts about sloths. 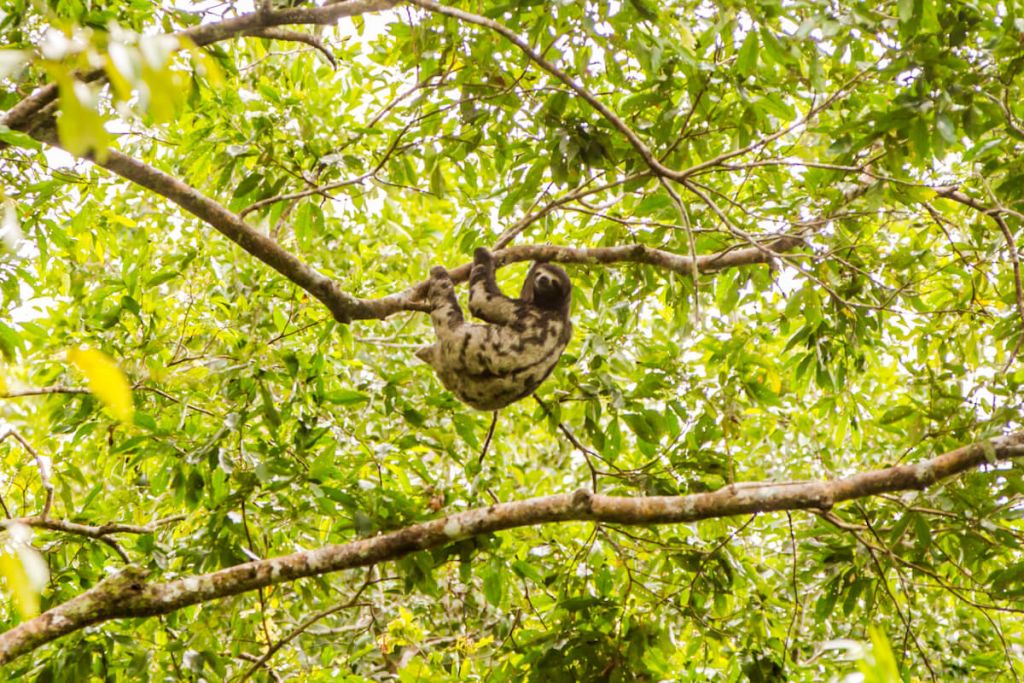 1. There are Two-Toed and Three-Toed Sloths

There are both two-toed and three-toed sloths, articulated in six species:

Three-toed sloths can weigh between 58 and 68cm and weight about 8kg where as two-toed sloths tend to be slightly bigger.

As one of the world’s slowest animals, sloths can take up to a minute to climb 2 meters. Their long arms and 10cm-long claws help them move through branches and spend days hanging upside down from tree branches, with some managing to stay in the same tree for years. 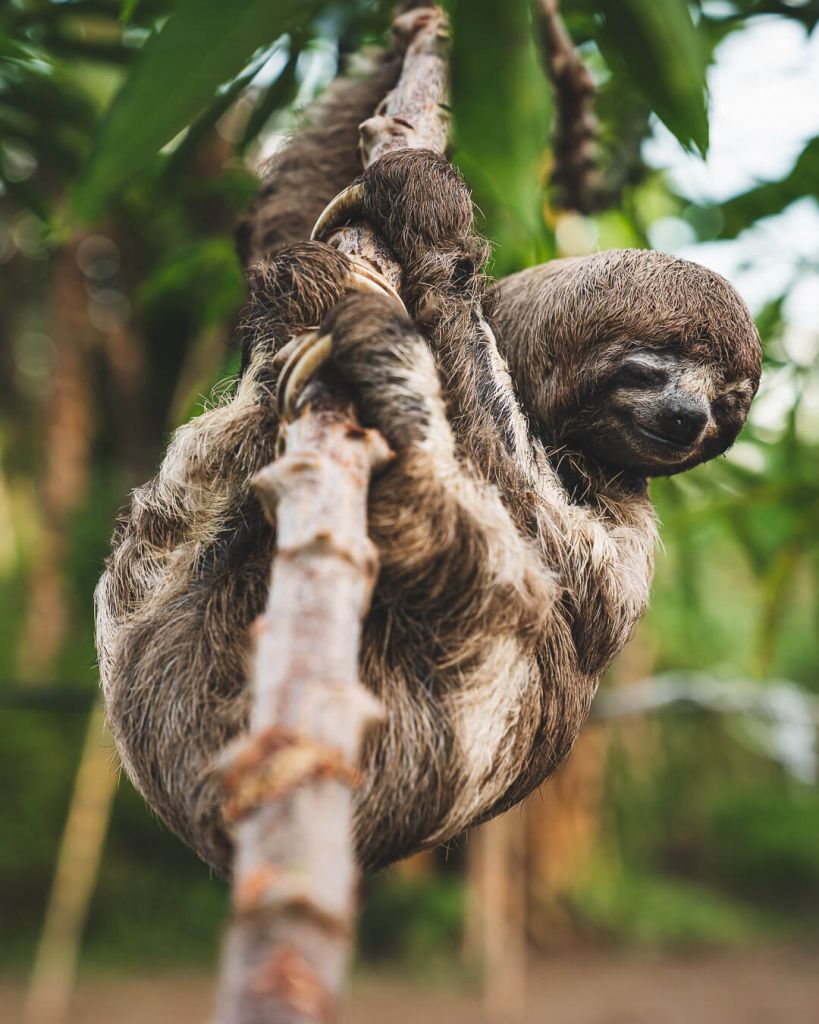 Sloths can spend anywhere between 15 to 18 hours per day asleep. If you manage to catch one moving, you’ll be amazed by their slow and languished moves explained by an extremely slow metabolic rate.

5. Sloths Call the Tree-Top Canopy in the Amazon Home

You’ll usually find sloths hanging from high cecropia tree branches, eating its tough foliage, or moving in and out of cool shade. In order to maintain their camouflage expertise, sloths will typically take little care to clean themselves to create the perfect environment for algae to grow: this resulting algae gives a slightly green tinge to their coat which blends with the surrounding leaves to guarantee the perfect cover against its enemies.

6. Sloths Adapt Very Well to Their Environment to Survive

Sloths have done remarkably well to adapt to their environment through not only camouflage but also their leisurely lifestyle: the sloth’s body is required to stay at a low temperature for the bacteria in their stomach to break down the foliage and avoid starvation. In fact, the existence of a large intestinal tract with four chambers means it can take up to one week to process the food they eat. 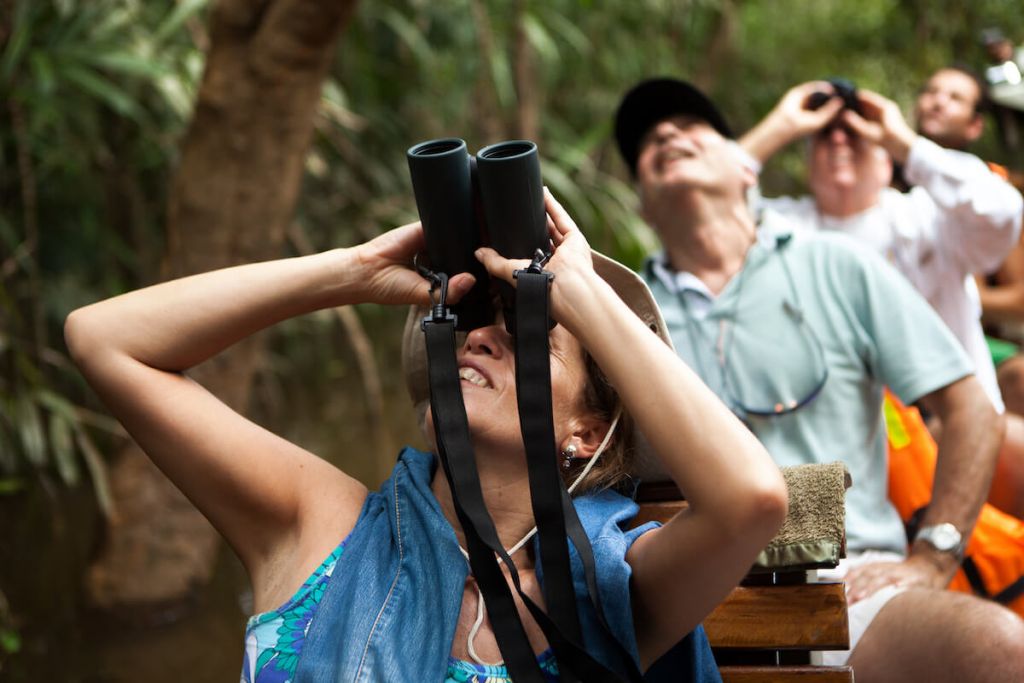 7. Sloths Can Only Have One Baby Per Year

Clinging to their mother’s belly might even be a baby. Generally, females will signal male sloths when they are ready to reproduce. If several males are interested, they will typically fight for the female to gain breeding rights. Sloths can have one baby a year with the gestation period lasting six months. Babies will stay with their mothers for about six months before being left to fend for themselves. Sloths reach sexual maturity after 3 years and can live up to 30 years.

8. Sloths are Not Mobile on the Ground

In rare instances, you might find sloths on the ground. However, their long arms and claws make it difficult to navigate this environment other than dragging themselves across the floor. This mobility disadvantage will means sloths will avoid going to the ground, only doing so to defecate. Indeed, there would be little chance for survival if they were to encounter a predator: their only defense mechanism in this scenario would be to claw and bite.

Although not all species of sloths are endangered, they face a growing threat of habitat loss in the Amazon region due to severe deforestation. This problem not only affects the natural ecosystem, but equally millions of indigenous people. Preserving this region should therefore be of utmost importance.

To learn more about Sloths in the Amazon, contact us at Delfin Amazon Cruises, or call 1-833-201-8684 to book your cruise in the Amazon.