The Pacaya Samiria National Reserve (RNPS) is the second largest natural protected area in Peru and is one of the best places for nature tourism lovers, as it has more than 1000 species of fauna and 965 of wild plants. In addition, it protects ecosystems of humid tropical forests that shelter great biodiversity of the Amazon, recognized as Natural Wonder of the World.

Pacaya Samiria stretches over Loreto, Requena, Alto Amazonas and Ucayali provinces in Loreto department. Its extension is of 2080 000 hectares and is located in Ucamara depression, where the rivers Ucayali and Marañón Rivers converge giving origin to the Amazon River, which form its natural limits. The south-western part is delimited by a fringe of low hills that divides the waters from the Huallaga River.

Its main purpose is to conserve the flora and fauna resources, as well as the scenic beauty characteristic of the humid tropical forest. It also seeks to engage local people in the benefits of conservation and good management of the ecosystem, and to promote and improve the use of natural resources in accordance with appropriate ecological development.

The RNPS shelters a high biological diversity and also an important human population that takes advantage of its natural resources. It includes the basins of the rivers Pacaya, Samiria and Yanayacu-Pucate. Although mostly a lowland alluvial and floodplain plain, it presents some low hills in the Pacaya River mouth.

This topography, together with the Amazon’s alternating hydrological regime of floods and voids, creates numerous islands, canyons and cochas (lagoons), among which stands out the famous cocha El Dorado, in the lower basin of the Yanayacu, which is the central tourist destination of the RNPS and a successful example of entrepreneurship in experiential community tourism. 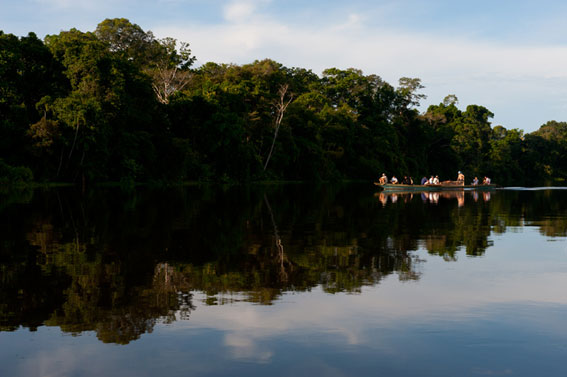 The reserve territories are centers of reproduction for several species of fish and they include zones with habitats of high fishing productivity. It also protects the most extensive area of the Amazonian flooded forest (ecosystem known as varzea). This huge freshwater swamp forest motivated its designation as one of the country’s first RAMSAR sites, in 1992 (the RAMSAR Convention seeks to preserve the flooded forests that are of paramount importance at a global level).

In the RNPS there are numerous communities, both native and traditional, as well as relatively recent settlers. Both the native population (belonging to the cocama-cocamilla tribe) and the miscellaneous group of settlers subsist on the exploitation of the reserve natural resources. Its territory offers benefits to thousands of people in the area and in neighboring cities, as well as the possibility of carrying out a first level experiential tourism of the Peruvian Amazon.

Pacaya Samiria is the home of more than 1025 vertebrate species, accounting for 27% of the diversity of these species in Peru and 36% of the total recorded for the Amazon. It houses important wildlife species considered as indicators of the good state of conservation of its territories, such as the sea cow or manatee (Trichechus inunguis), the pink dolphin (Inia geoffrensis), the gray dolphin (Sotalia fluviatilis), the white-bellied spider monkey (Ateles beltzebuth), the red-faced spider monkey (Ateles paniscus), the giant otter or river wolf (Pteronura brasiliensis), the puma (Puma concolor), the tapir (Tapirus terrestris), the jaguar (Panthera onca), the white-lipped peccary (Tayassu pecari), the collared peccary (Tayassu tajacu), the red brocket (Mazama americana), the red howler monkey (Alouatta seniculus) and the brown woolly monkey (Lagothrix lagothricha).

The ornithological fauna consists of 449 species, from where the bird populations related to the aquatic environments are outstanding, which are also excellent indicators of the conservation status of the flooded forests. Among them are the great white egret (Egretta alba), the cocoi heron (Ardea cocoi), the rufescent tiger heron (Tigrisoma lineatum), the neotropic cormorant (Phalacrocorax brasilianus) and several other species.

The hydrobiological resources of the Pacaya Samiria Reserve are the most important both for their role in ecological processes as for their economic value, and are also the source of nourishment for local people.

Also noteworthy is the presence of large quantities of ornamental fish for exportation, such as the gilded catfish (Zungaro zungaro), the silver arowana (Osteoglossum bicirrhosum), the ocellate river stingray (Potamotrygon motoro), the bleeding heart tetra (Hyphessobrycon erythrostigma) and dozens of other species.

With regard to the flora, the RNPS is home to 965 species of wild plants and 59 of cultivated plants. Its value for the protection of biological diversity is largely justified by the presence of immense extensions of the moriche palm or aguaje forests (Mauritia flexuosa) and mixed forests of other palms. Visitors can also find a great diversity of medicine plants and trees that can reach a height of 150 feet, like the lupuna (Ceiba pentandra).

Within the reserve and in nearby areas, there are approximately 203 populated centers that house more than 120 000 inhabitants. In Pacaya Samiria you can find everything from the basic amenities for a lodging, to an exclusive service. You can also travel on cruises and enjoy a luxurious experience.

There are three main tourist circuits:

Being such an extensive area, there are several routes and activities offered, such as trekking, hiking, camping, caving, kayaking, birdwatching, and flora and fauna spotting. Sailing along the rivers, tourists can see manatees, pink dolphins and monkeys, as well as other species of birds, mammals and fish.

It is possible to visit the Pacaya Samiria National Reserve throughout the year. In the rising tide season (November-April) you can observe birds, monkeys and amphibian animals, although usually the species are sheltered in the restingas (non-floodable uplands). In the ebb tide season (May-October), fluvial beaches are formed where the aquatic turtles spawn; lizards, taricayas and charapa turtles can be observed.

Between July and November is the season of spawning of taricayas. The settlers, organized in the Units of Fishing (UP), arm the so-called “incubation banks”, where they will place the eggs of these turtles to protect them, wait for their hatching and return to the river, thus avoiding the indiscriminate collection. It should be noted that there is a maximum limit for the hatching of the eggs that was established on the basis of studies, so the surplus eggs are destined for consumption and commercialization by the villagers. This is because excessive release of a single species in the natural environment is not recommendable since the Amazon has a fragile balance. The eggs hatch in November, being an impressive spectacle for natives and tourists.