Things to See and Do in Iquitos: A Gateway to the Peruvian Amazon

EXPLORE
Things to See and Do in Iquitos: A Gateway to the Peruvian Amazon

Looking for something different to accompany your Peru Amazon cruise? Spend some time in the remote jungle city of Iquitos!

On embarkation day with Delfin, we recommend arriving by flight into Iquitos by 5:00pm at the very latest. From there, we take a 1.5 hour journey across paved road to the town of Nauta, then venture on board just in time for dinner and stargazing in the pitch black night.

However, if you can spare it, it’s worth arriving a bit earlier to Iquitos or stay a day or two after your cruise with Delfin. Here are our favorite ways to pass the time in this fascinating rainforest city connected with the rest of the world only by water or air.

In 1982, celebrated German director Werner Herzog released his film Fitzcarraldo recalling the era of the rubber boom and barons at the turn of the century in this area of Peru. The film’s plot is based off the life of rubber magnate Carlos Fermín Fitzcarrald who, in the 1890s, who incredibly maneuvered the transport of a steamship in this unforgiving and harsh jungle environment. Rock star and occasional actor Mick Jagger was also poised to stay for a period of time, until there was a conflict with his schedule. Today, visiting La Casa Fitzcarraldo, you can see where the cast of the movie stayed, including that of Mick Jagger! The owner of the hotel is a character in and of himself, and he has many stories to share since he has lived in Iquitos for many decades and seen many eras if change sweep the city. It is also worth stopping by La Casa Fitzcarraldo for a delicious meal (the kitchen staff is definitely talented!) and to relax in the swimming pool for the day.

Grabbing a Drink at Arandú Bar

When visiting Iquitos, you’ll surely stop by the malecón¸ or the riverwalk along the Itaya River. Under the heat of the equatorial sun, you might crave a refreshment. At Arandú Bar found at the middle of the promenade, beers and sodas are served fresh and chilled. If you sit inside (rather than on the street level patio), you’ll be surrounded by typical regional, neon-colored murals. The one by famed local artist Luis Beltran is one of his first and is an Iquitos treasure. 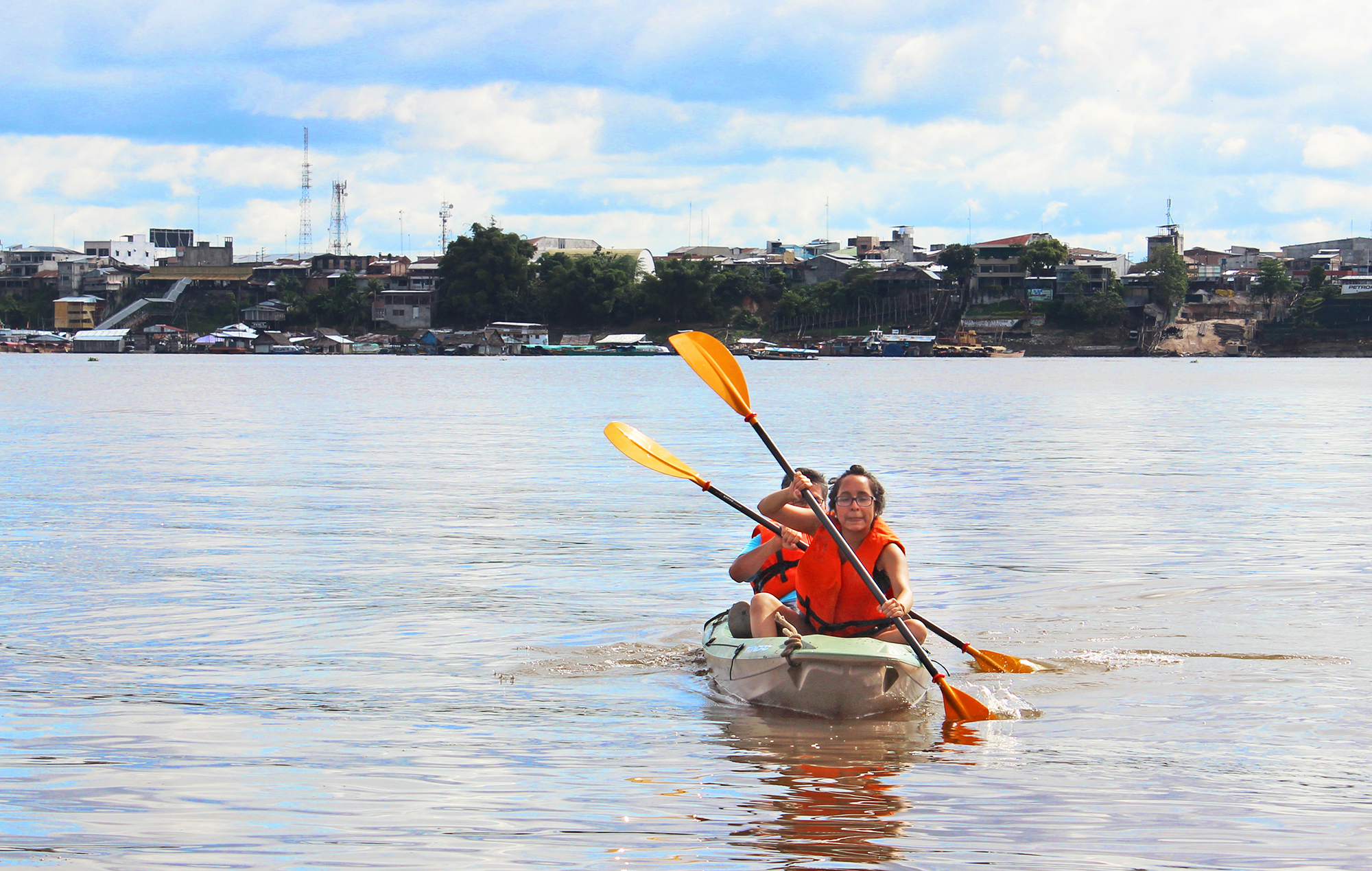 Bring your sense of adventure to Al Frio y Al Fuego, a floating restaurant in the middle of the Itaya River fronting Iquitos. The shuttle boat transfer, in a large version of a traditional peque-peque dugout boat, is free and easy to access from the restaurant’s private port. Here, you can rent a professional grade kayak for a paltry price and explore the surrounding waters by your own efforts. You can’t beat the view of the city from your kayak or the restaurant! Afterwards, dry off and enjoy a delicious regional taster dish or maybe a just-pressed tropical fruit juice. This is a great way to preface or wrap up your Amazon cruise with us. 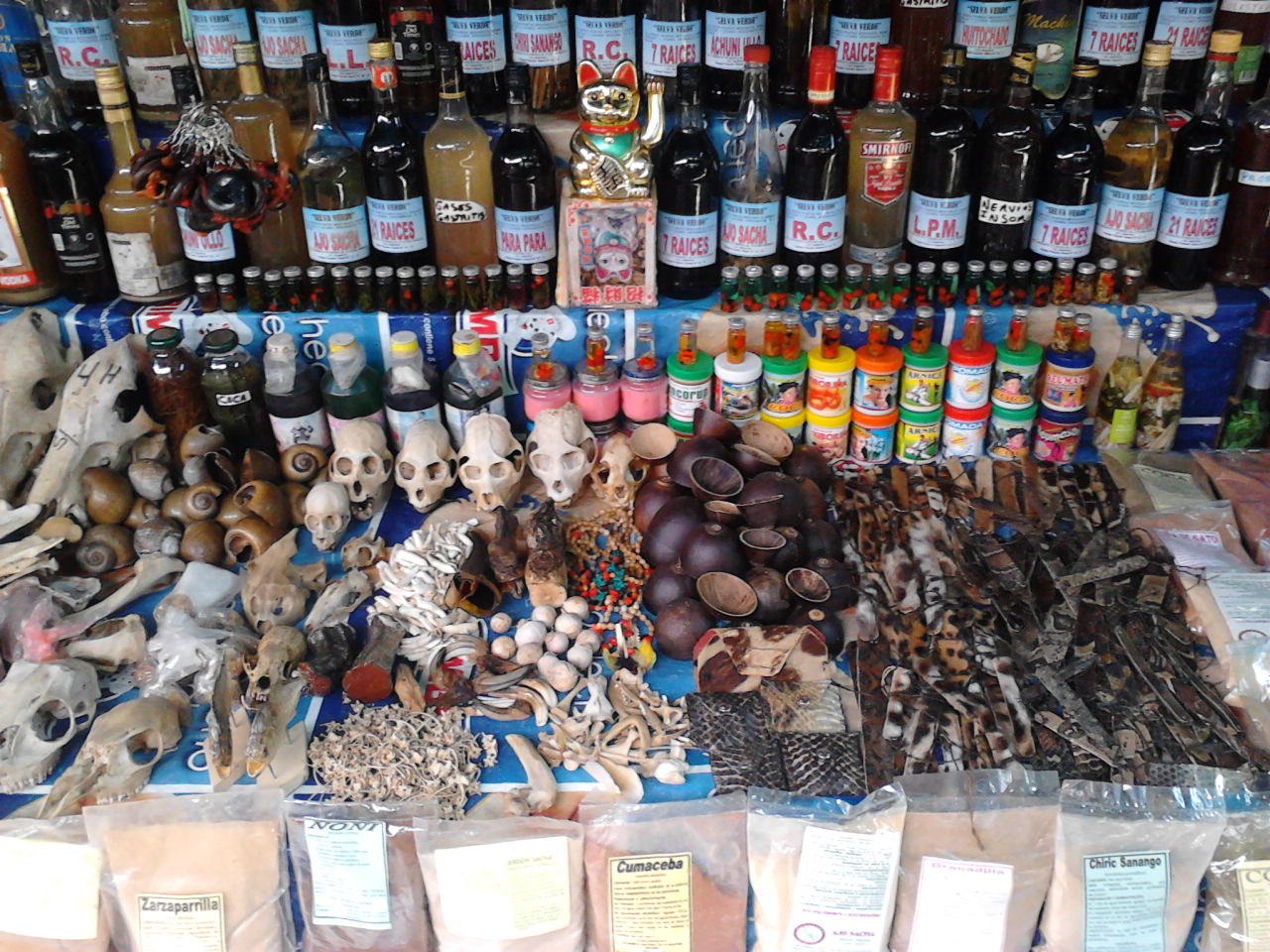 One of the beauties of the Amazon is that there is a high and low water season every year, each of which brings vast changes to those who live in the jungle, both animals and humans. To adapt, the people living on the banks of the river in Iquitos have constructed their homes on stilts to anticipate the rise and fall of the waters. In the Belen neighborhood and market, you can see exotic river fish and delicacies for sale, as well as traditional meats such as chorizo sausage and cecina bacon which forms a large part of the Loretana diet. A witches’ corridor in the market is also where you’ll find potions of all kinds and claims. Also take a peek at the stilted houses for a glimpse into this unique way of life in Iquitos.

If there’s anything the Spanish conquistadors left behind in the realm of city constructions in the Latin world, it is the establishment of squares and plazas as central gathering places in any city or town, large or small. 28 de Julio Square in Iquitos is independent of the official central Plaza de Armas, but it is regarded as the biggest square in all of Peru. On the perimeters, you’ll see examples of typical restaurants favored by locals, and throughout the years, city events and festivals are held here.

Want to hear more tips for spending your time in Iquitos before or after sailing with us? Contact us today!